Fans of Buffy and Lucifer are sure to devour Vampire Huntress, the first book in the addictive series REBEL ANGELS by award-winning author Rosemary A Johns. The thrilling adventure will have you on the edge of your seat until the very last page. If you’re looking for excitement, action, hard hitting, unexpected surprises then the is the book series for you. Enjoy! 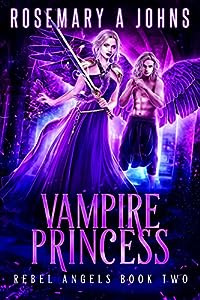 Angel World is no heaven…

Held prisoner, Violet never anticipated her long-lost mother would be the poisonous Queen of Angel World. Or that she’d be forced to rule as a corrupted princess or risk a perilous escape.

When a harem boy angel draws Violet into the dark court’s twisted sports, she’s thrown into deadly trials that even her monstrous powers may not be able to overcome. If she refuses, both the snarky angel and geek vampire she loves will be enslaved to a powerful cult.

No matter what she chooses, she’ll be facing the dangers of Angel World on the eve of war… 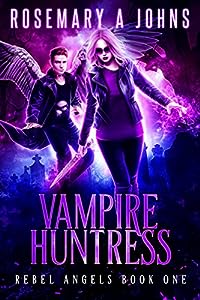 Vampires and angels are locked in a deadly war. But first, they want their daughter back.

Half vampire/half angel, Violet, was abandoned amongst the humans in London as a baby. Suddenly discovering monstrous powers on her twenty-first birthday, she thinks she’s the most dangerous creature to prowl the streets.

When a snarky angel falls into her lap and her adopted sister disappears, Violet is forced into a new role: Huntress. But the deeper she’s dragged into this supernatural world, the more she struggles to survive.

On the run, Violet’ll have to rely on a sexy vampire geek, while facing off the harem boy angel threatening her sister. And there’s only one way she’ll win: by letting out the monster… 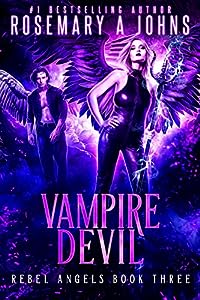 This is why Fallen angels fear the light…

Snatched to the Under World, Violet discovers that the father who abandoned her as a baby is the tyrannical king of hell. She’s forced to battle in the Bone Carnival to prove her loyalty in a court of the wildest vampire rebels ever to be cast out of Angel World. Or else she won’t be able to save the angels… or her sister.

When she defies the anarchic vampire court, she’s tested in three impossible Devil’s Quests, which risk letting out the worst monster of them all: and it’s inside her. If she fails, she’ll be bonded eternally to a tyrannical general, whilst the vampire geek and sexy angel she loves will become the elite army’s plaything.

The Apocalypse is coming, and Violet may just be the weapon that destroys the world…