Who Are Those Lovely Ladies?

This is the best picture I could get of my sweet chickens. As you can see my little bantam Heather is still warming up to the group. 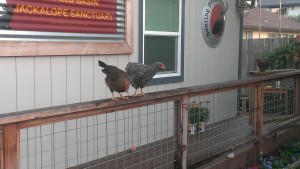 Summer, Jackie, and way in the back Heather.

Washington, D.C. Midday. A man waits at a bus stop, his intentions unknown. Two government operatives have been stalking him for days, waiting for him to make his move. Unexpectedly, the man takes off running and heads for a deserted warehouse.

Jack Noble and his partner, Frank Skinner, believe the man to be part of a terrorist organization that is involved in smuggling drugs and guns and men into the country. But it turns out their plan involves far more export than import, and hits a lot closer to home.

As the case in this explosive thriller unfolds, the man behind it all reaches out to Jack with a simple message… 37 hours.

She’s not just a random homeless girl. Lorelei is street smart, elusive and manipulative. She’s a survivor, always on the move. Always one step ahead of the danger in her past.

Emily’s a hard-partying bartender in downtown Austin with problems of her own. When she meets a handsome reporter looking for a photographer, Emily volunteers her camera skills. As she follows him into the sordid world of gutter punks, Emily finds an unexpected friendship that will redefine her life.

But Emily realizes too late that each of her attempts to help only puts her new friend in ever increasing peril. Can she unravel the mystery of Lorelei’s past and find a way to protect her? Or would the girl be better off unknown and on her own?

Anonymity is a gritty, harrowing account of young people who live life on the edge when all they really want is a safe place to call home.

Click here to get this book for FREE
(also available from Amazon. FR  IT  ES )

As if it’s not complicated enough overseeing the population of ten worlds, North finds himself trying to understand a new planet which has appeared out of nowhere and is seemingly populated by a mass of completely confused human beings.

Can he unravel the puzzle alone or can he persuade a love-sick young hunter to help?

To kill or not to kill, that is the question down on his luck private investigator Jack Reece must ask himself when a beautiful billionaire widow offers him $1 million to track down the 400 lb. child predator who raped her daughter … and then offers him $4 million more to execute him. Jack’s moral code is put to the test when he comes face to face with pure evil in a den of sin and sickness and must decide if righteousness can ever come from the end of a gun … and if the scars on his soul would be worth the bullets and blood.

Jackie Delgado didn’t want a new man in her life until a dreaded blind date turns out to be more exciting than she’d ever imagined. When her youngest son leaves for college, Jackie is hit hard by empty nest syndrome and pours herself into her work as a teacher. Bowing to pressure from friends, Jackie agrees to a blind date. But when Mark Brennan calls, she realizes the date won’t be “blind.” He’s the father of one of her students.

Can Jackie and Mark find the courage to leave the past behind and embrace a new love? And how will a surprise pregnancy affect all their lives?