Rain Or Shine In The Weeds

I need to get back out in the garden and clean it up. It is filled will spent plants and weeds. Not a place I want to hang out in at all. I have been leaving the dead plants alone for the wildlife to use over the winter because that’s what “They” say to do. But I can’t take it anymore. It looks awful. I should probably finish taking down the Christmas decorations first. I was kinda waiting to see if hubby would do it without me asking. Unfortunately he doesn’t seem to mind the decorations at all. Bummer. I need to take them down before animals makes nests in them, forcing me to leave them up all up through Spring. Fine… first Christmas decorations, then time to get lost in the weeds. RAIN OR SHINE! 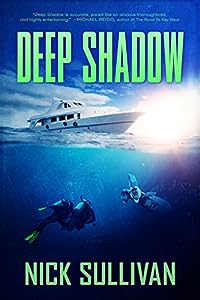 In the turquoise waters of the Caribbean, something lethal is on the move.

Scuba divers travel from all over the world to visit the little island of Bonaire, with its crystal-clear waters and a host of beautiful marine life. After three years in the “Divers Paradise”, divemaster Boone Fischer thought he’d seen it all; but on a routine afternoon dive, he spots something that will turn his tranquil life upside down.

From the arid shores of the ABC Islands to the tropical jungles of Venezuela — from the ocean depths of the Southern Caribbean, to the lush islands of the Northern Leewards, Deep Shadow takes Boone and the reader on an action-packed adventure filled with danger and suspense. 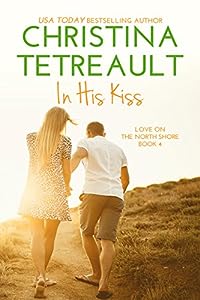 He has only a month to win back the woman he loves.

When Ella Bridge fell for Alfred Striker, she thought she’d found the one. But then, days before she left for France as part of a professor exchange program, Striker walked away. Now she’s back home in North Salem, determined to ignore him no matter how tempting she still finds him.

Before Ella, Striker lived a carefree life, responsible for no one’s happiness but his own. With Ella, though, images of minivans and white picket fences started to surface, and he bolted. Striker quickly realized walking away from Ella was the biggest mistake he ever made. With her home, he’s determined to win her back.

Although she’s positive it’s a big mistake, Ella agrees to give Striker a month. Can Striker prove to Ella that he loves her, or will he break her heart again? 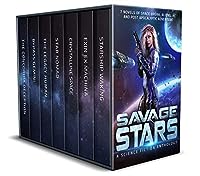 The universe can be savage, but these heroes won’t go down without a fight.

Seven full-length novels by bestselling authors that explore the far reaches of the universe, the limits of the human mind, and the divide between man and machine. Aliens, AI, and post-apocalyptic adventure — you’ll find them all among the Savage Stars.

About the Books:
Starship Waking by C. Gockel
On an icy, barren world, a starship dreams of doom… Her nightmares will force an alien race to make contact with the most unlikely of heroes — 6T9, a pleasure ‘bot struggling to find purpose, and Volka, a lonely mutant on a repressive homeworld. The galaxy will be shaken to its core. The starship is waking.

Exin Ex Machina by G. S. Jennsen
When man and machine are one and the same, death is no longer an inevitability. Though Nika Tescarav has lived many lives, she no longer remembers them. But if whoever erased her past did so to silence her, they’ve failed. Enter a world of technological wonders, exotic alien life, captivating worlds — and a dark secret that will shatter it all.

Crystalline Space by A. K. DuBoff
Elle and a team of companions with magically enhanced abilities embark on an interstellar quest to stop an alien invasion. If Elle and her friends can’t stop the Darkness corrupting the crystalline network connecting the planets, their worlds and loved ones will be lost in shadow forever.

Star Nomad by Lindsay Buroker
The Alliance has toppled the tyrannical empire. It should be a time for celebration, but not for fighter pilot Captain Alisa Marchenko. After barely surviving a crash in the final battle for freedom, she’s stranded on a dustball of a planet, billions of miles from her young daughter. She has no money or resources, and there are no transports heading to Perun, her former home and the last imperial stronghold.

The Legacy Human by Susan Kaye Quinn
What would you give to live forever? Elijah wants to become an ascender, a human/machine hybrid, but it’s forbidden for legacy humans like him. When he’s sponsored for the creative Olympics, he could win everything, including ascendance… or lose it all playing the ascenders’ Games.

Bypass Gemini by Joseph Lallo
Lex was the next great hoversled pilot until a fixed race got him banned. Now a freelance delivery boy, life couldn’t get any worse. Then a mysterious suitcase got him mixed up with mobsters, a megacorp, and a mad scientist. Now he must solve the mystery or die trying.

The Concordia Deception by J. J. Green
After spending 184 years in suspended animation, scientist Cariad begins a new life in a remote space colony. On a planet rife with intrigue, betrayal, and alien threats, can she fight to preserve humanity’s future in the stars? 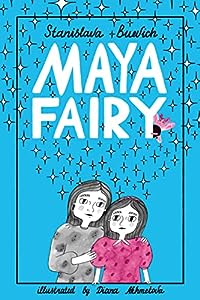 An enchanting children’s book about fairies, magic, and fantastical conspiracies that are right under our noses!

I have to tell you a big secret, but you can’t tell anyone…

They are as real as you and me, and every child has one. They live in your houses, they hide in your walls and they make sure that all children dream beautiful, wonderous dreams.

Humans are not supposed to know this, you see, and please don’t tell anyone, or I will get in trouble!

The only reason I am aware of their existence is because a few years ago, my daughter Maya managed to catch her fairy, and they became friends. But when other fairies in London’s Notting Hill started to disappear one after another, it became clear that something was dangerously amiss. Who was behind it? Mysterious fairies in black cloaks? Someone from the High Fairy Commission? An elusive oil tycoon? Or perhaps strange men in black overalls who attempted to break into our home? It was up to my daughter, her fairy and myself to solve the dark and dangerous mystery – a conspiracy that transcended the borders between the fairy and the human worlds.

What other dark secrets awaited us? 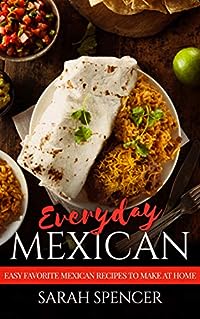 Bring the authentic flavors of Mexico into your kitchen! Prepare a Mexican meal your friends and family will love and ask you to make again and again!

Mexico’s rich food history has been acknowledged across a world that now celebrates traditional Mexican culinary practices. Flavor-rich Mexican cuisine is appreciated worldwide for its clever use of chilies, peppers, and beans to create unique textures and flavors.

Mexican foods bring real charm to any celebration, casual party, formal get-together or classic weekend dinner. Modern Mexican cuisine represents an amazing combination of culinary craft from Spain and Mexico. The people of Mexico have great passion for their food; they are proud of the culinary customs that guarantee a perfect balance of flavors in all their meals.

Mexican foods are full of exotic flavors resulting from their unique preparation techniques. They are usually multilayered — think of tacos, burritos, tortillas, and carnitas — and this means that it takes longer to prepare and arrange the ingredients for some recipes. But in the end, it is well worth your effort to get a perfectly balanced meal with unique flavors.

No matter how many times you enjoy Mexican recipes, you will always want to have them again and again. Not everyone is fortunate enough to live in Mexico and enjoy its world-class cuisine firsthand, but you can make it easily in the comfort of your home. Mexican food may seem challenging and complex to prepare at first, but the fact is that once you start making it, achieving an authentic taste will soon become almost effortless.

This cookbook delivers a handpicked collection of flavorful Mexican recipes that are easy to prepare at home. Some of these recipes are a little rich — not necessarily the best thing to eat when you’re on a diet — but they are all full of amazing flavors. You’ll get to explore a wide range of Mexican dishes for your various cooking needs, be it breakfast, poultry, meat, seafood, fish, vegetarian mains or desserts.

Inside, you’ll find over 90 classic Mexican recipes including:
Sauces, dressings and seasonings such as the Fajita Seasoning Mix and the Salsa Verde
Breakfast dishes like the Gordita Breakfast Wraps and the Egg Bean Vera Cruz
Recomforting soups recipes like the Wholesome poultry recipes such as the Chicken Verde Casserole and the Tinga De Pollo
Bountiful beef recipes like the Birria de Res, the Beef Burrito, and the Taco de Bistec
Satisfying pork and lamb recipes like the Pork Empanadas from Scratch, the Lamb Chipotle Tortilla, the Taco Pork Chops, and the Pork Carnitas
Delightful fish and seafood recipes such as the Shrimp Tequilla Tacos, the Veracruz Sea Bass, Seafood Enchiladas, and the Spicy Fish Taco Bowls
Amazing vegetarian mains and sides such as the Chilli Renellos, the Refried Beans, and the Quick and Easy Frijoles Charros
Plenty of desserts and drink recipes to make awesome desserts and drinks such as the Horchata, the Tres Leche Cake, the Sopapillas, and the Cheesecake Taquitos

All recipes come with a detailed list of ingredients, cooking and preparation times, number of servings, and easy to follow step-by-step instructions. 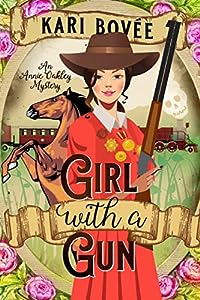 She’s on the rise to fame and fortune, but her fledgling notoriety comes with some deadly consequences.

Following a stunning performance in a shooting contest against a world-famous marksman, Annie Oakley is offered a head-lining position in the renowned Buffalo Bill’s Wild West Show. Finally, she has a chance to provide for her family — and make her dreams come true. But after her sudden catapult to fame, Annie’s Indian assistant is found dead in her tent.

Uncovering a shocking secret from the victim’s past, the sharpshooting sensation believes it’s murder. Determined to find the truth, Annie dives headlong into an investigation, and it soon becomes evident the murderer is closer than she thinks. And when her prized gelding goes missing, the sure-shot realizes she might have been the target all along.

Can America’s favorite girl with a gun save her equine friend and find the killer before everything she’s worked for is destroyed?

Girl with a Gun is the first book in the Annie Oakley historical mystery series. If you like a feisty heroine and a fast-paced plot that keeps the pages turning, you’ll love this wild ride with the iconic Annie Oakley in the saddle.