And Then There’s Margaret by Carolyn Clarke

For fans of Maria Semple’s Where’d You Go Bernadette or Camille Pagan’s I’m Fine and Neither Are You, comes the perfect laugh-out-loud dramedy AND THEN THERE’S MARGARET about marriage, midlife and a controlling, manipulative and self-absorbed mother-in-law thrown into the mix. MULTI-AWARD-WINNING debut novel, AND THEN THERE’S MARGARET, takes readers on a relatable and hilarious ride, as Allie realizes the only way to survive the angst of family is to let go… and let be. 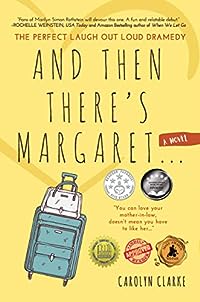 And Then There’s Margaret
by Carolyn Clarke

When Allison Montgomery’s beloved father-in-law and long-time confidant passes away, her mother-in-law, Margaret, ‘temporarily’ moves in. From rearranging the furniture and taking over the kitchen, to undermining and embarrassing Allie at every turn, including funding her daughter’s escape, throwing a hissy fit at the mall, and publicly equating Allie’s glass of Chardonnay to full blown alcoholism, Margaret turns Allie’s life upside down causing her to bounce between a sincere desire to support her grieving mother-in-law and an intense urge to simply push her out of the nearest window.

Feeling annoyed, trapped and even a little childish, Allie struggles to avoid a complete meltdown with help from her fearless and audacious best friend, a plan for reinventing herself and enjoying a second act, and, yes, a few glasses of Chardonnay. Along the way, Allie discovers the reasons behind Margaret’s attitude toward her all these years. Does it help? Maybe…