The Kingdoms of Sand series by Daniel Arenson

Sweeping from snowy forests to cruel deserts, from bazaars of wonder to fields of war, here are the tales of legionaries and lepers, priests and paupers, kings and crows. A girl travels across endless dunes, seeking magic; a cruel prince struggles to claim a bloodstained throne; and a young soldier fights to hold back an overwhelming host. As the empire spreads, the fate of the Sela family–and of all civilization–stands upon a knife’s edge, for under the storm of war, even the greatest nations are but kingdoms of sand. 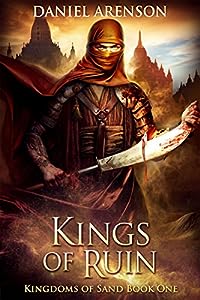 Kings of Ruin (Kingdoms of Sand Book 1)
by Daniel Arenson

In an ancient world of sand and splendor, an empire awakens.

Aelar, a mighty nation, spreads its tentacles. Its oared galleys storm the seas, and the waters run red with blood. Its legionaries swarm desert ruins, smiting barbarian hordes. Its crosses line the roadsides, displaying the dying flesh of heroes.

The powerful Sela family has avoided the empire until now. The family has carved out an idyllic life between sea and desert, ruling a bustling port, a thriving city, and lush vineyards. Yet when an imperial fleet arrives in their harbor, everything the Sela family has built threatens to collapse. 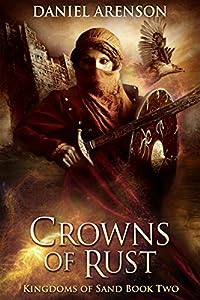 Crowns of Rust (Kingdoms of Sand Book 2)
by Daniel Arenson

The noble House of Sela is shattered. Its five children, once heirs to a bustling port, are scattered around the Encircled Sea. Their kingdom, the ancient land of Zohar, lies in ruin following a devastating invasion.

In a shattering world, the pieces are up for grabs. Here fleets clash at sea, and desert warriors battle among dunes and ancient ruins; cloaked conspirators gather in shadowy alleyways, vowing to slay their emperor; and a girl seeks the magic of light beyond guardians of shadow. In a land of sand and splendor, glory will go to those with the sharpest steel and the hardest hearts. One war has ended. Now the world will burn.

When the Encircled Sea storms, kingdoms are no sturdier than sandcastles. Rulers and rebels battle for golden thrones, but will they find only crowns of rust? 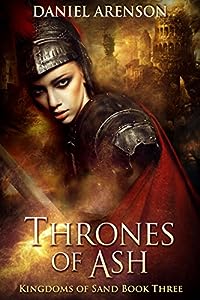 Thrones of Ash (Kingdoms of Sand Book 3)
by Daniel Arenson

The halls of power lie in ruins. The emperor’s children, the sadistic Porcia and the cunning Seneca, battle for the throne.

Around them, their world crumbles. In a southern savanna province, a young queen rises up against the Empire. In northern misty forests, barbarian tribes gather for war. In Zohar, the eastern desert, the hero Epher Sela joins a rebellion against the vicious Empire. Meanwhile, past deserts and mountains at the edge of the world, an ancient evil awakens, threatening to undo all that humanity has built.

Legionaries, rebels, and priests clash, vying to rule crumbling kingdoms. Yet when victors emerge from the inferno, will they find only thrones of ash? 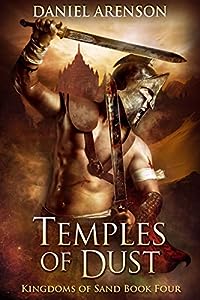 Temples of Dust (Kingdoms of Sand Book 4)
by Daniel Arenson

Game of Thrones meets Spartacus in the epic fourth novel in the bestselling Kingdoms of Sand series. From the USA Today bestselling author of Song of Dragons and Earthrise.

The sadistic Empress Porcia rules over a shattering empire.

Enemies are everywhere. Risen from misty forests, a barbarian horde sweeps toward her capital. Across the southern sea, her brother builds an armada to slay her. In the cold north, young Princess Valentina seeks allies to destroy the Empire and rebuild the Republic. As the noose tightens around Porcia’s neck, the empress musters her armies, willing to burn the world to protect her throne.

Meanwhile, in the eastern desert, the land of Zohar groans under the heel of the Empire. Epher Sela has taken the small kingdom’s throne, and the Empire’s legions march to destroy him. Even farther east, his sister–the lumer Maya–discovers the secrets of light and magic. Perhaps only Maya can save Zohar during its darkest hour. But before she can face the legions, Maya must defeat an unearthly evil, one more dangerous than any human host.

Soldiers and sorcerers. Emperors and urchins. Priests and princes. In a burning world, they battle for power and pray for deliverance. Yet do their gods truly hear, or do all their prayers merely echo in temples of dust? 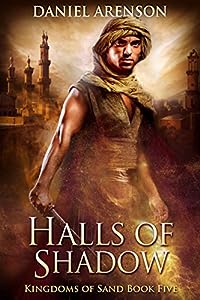 Halls of Shadow (Kingdoms of Sand Book 5)
by Daniel Arenson

The world reels from a shocking assassination. The Aelarian Empire is cracking. From the ashes of a burnt world, warlords, barbarians, and rebels emerge to claim the remains.

Outside the walls of Aelar, different factions converge. Tribal warriors prepare to shatter the gates. Valentina, a senator’s daughter, seeks to enter the city and rebuild the Republic. Prince Seneca, the last scion of a mighty house, battles his rivals to the throne and strives to hold the Empire together. Meanwhile, within the walls, dark magic and conspiracies brew.

In the distant desert, the kingdom of Zohar crumbles. The Empire musters to grind Zohar’s cities into dust. Epher, King of Zohar, and his sister Maya, a powerful magic-user, fight desperately to defeat the Empire’s legions. Yet their greatest enemy might be the mysterious, shadowy figure that roams their ancient land.

In smoldering battlefields, crows feast and humans squabble for the last shreds of power. Yet can the splendor of past glory ever shine again, or will the final victors rule from halls of shadow?