The Famine Cycle Trilogy by J.D.L. Rosell is perfect for readers who like political intrigue, hard magic systems, awakening gods, and seedy medieval cities, or love books like The Lies of Locke Lamora and Mistborn. Grab your copy TODAY!

Whispers of Ruin: An Epic Fantasy Saga (The Famine Cycle #1)
by J.D.L. Rosell

A trader of secrets. A king’s demise before his time. The dragon god threatening to consume the world…
In a city divided by schemes and treachery, Airene the Finch is a penniless commoner scraping a living through a trade in valuable secrets. Despite coming from a debt-ridden family, she has claimed a sliver of notoriety through her relentless ambition and ingenuity.

But Airene has always yearned for more. She wishes to be a Verifier of Truth, part of an ancient order that uncovers corruption at the highest echelons of society. She longs to bring justice to an unjust world.

So when her nation’s figurehead ruler dies under suspicious circumstances, Airene seizes her opportunity. Her search for the truth behind the ruler’s death will bring her into conflict with outlaw sorcerers, underground societies, corrupt politicians — and far deadlier dangers.

Can Airene uncover the plot and stop the forces behind it, or will the price of victory be too high to pay?

Whispers of Ruin is the first book in the epic fantasy series The Famine Cycle.

Echoes of Chaos: An Epic Fantasy Saga (The Famine Cycle #2)
by J.D.L. Rosell

Every war has its sacrifice. As her city falls into anarchy, Airene the Finch must find the mythical secret to defeating a daemon god — before he escapes his crumbling chains…

The Conclave, center of its government, lies in ruins.

The Manifest, the rebel movement of dangerous rogue sorcerers, extends its reach into the heart of the city.

And an ancient enemy, long believed to be myth, has reawakened at last.

Airene the Finch is one of the few who knows the truth. Amid the rising anarchy, she seeks the secret to defeating the rising daemon god.

But magic blossoms within her, erratic and deadly. Threats and treachery lurk in the shadows. Armies march toward Oedija’s walls.

And the sacrifices Airene must make come with terrible consequences… 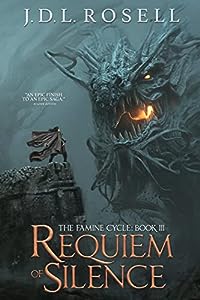 Requiem of Silence: An Epic Fantasy Saga (The Famine Cycle #3)
by J.D.L. Rosell

The Famine Cycle comes to its startling conclusion in Book 3, REQUIEM OF SILENCE.

Every world has its end. With Famine returned and freed of his restraints, Airene must find a way to stop the daemon god from devouring the world — no matter the cost…
The armies of the Avvad, the most powerful empire in the world, have arrived at the walls of Oedija. Despot Jaxas has rallied the city’s meager defenses, but with the Manifest and Underguild still lashing in their death throes, the realm is barely holding strong.

Even facing the destruction of her home, Airene keeps watch for a different threat. Famine, the God of Hunger, has finally broken free of his cage and feasts upon the world. Unfettered, he will consume all life on its surface.

When an unexpected ally appears, Airene and her companions embark on a quest to find a way to stop the daemon god. Racing against time, seeking to stay ahead of both Avvad and Famine, they seek allies and weapons receded into myth.

But no war is won without great sacrifice — and if she is to succeed, Airene must sacrifice all she is…
The enthralling epic fantasy trilogy comes to an end in Requiem of Silence, Book 3 of The Famine Cycle. Complete the cycle today.