Justice for the Black Knight by Jerri Blair

Justice for the Black Knight by Jerri Blair is the story of a 1981 trial, where Annabelle and Ruby reach back into the past to try to prove that Freddie is a hero instead of a villain. It is an inspirational tale of friendship extending beyond the borders of race, which also takes an exciting and realistic look at the process of obtaining justice through the legal system. 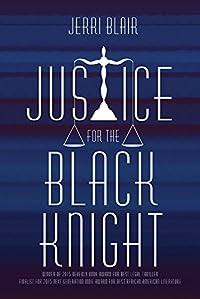 Justice for the Black Knight
by Jerri Blair

“Justice for the Black Knight” won the 2015 Beverley Hills Book Award for Best Legal Thriller. It was awarded the prestigious star by Kirkus Reviews which called it “… superbly crafted… intricately detailed… a must read story of relationships, prejudice and bravery, a vivid paeon for justice.” Red City Review wrote that it “… quite astutely tackles the topic of racism, combining the best attributes of legal thrillers like ‘The Firm’ with the exploratory and contemplative tone of subtle but powerful works of literature like Ralph Ellison’s ‘Invisible Man.” Clarion Reviews called it “… a twentieth century law and order fable… that has the feel of a true crime mystery, coming of age novel, and high stakes courtroom drama rolled into one… ” This historic saga tells the tale of evolving racial justice in the American judicial system.

This award winning legal thriller tells the story of Freddie Edwards, a black man on trial for the brutal murder of an elderly white man. Was Freddie a monster or a hero when he took the old man’s life? How did he come to be at the place that so dramatically changed his life? This book examines the moment of the crime from every perspective, and leaves it to the reader to decide what Freddie’s fate should be. Beautiful relationships wrapped in a dark mystery from the distant past impact this trial for his life. His sister Ruby and old friend Annabelle became friends during the shadow of the Great Depression, crossing the boundaries that separated them by race. These two old friends are reunited at Freddie’s murder trial. Neither of them want to believe their childhood hero would commit such a heinous crime. To them, Freddie was always the “Black Knight” who rescued them from childhood traumas. But now, Freddie finds himself on trial for the brutal murder of an elderly man of stellar reputation, facing the death penalty, represented by an incompetent attorney, and unlikely to receive the justice he thinks, but isn’t sure, he deserves. They have only one choice. They must delve into the past to discover evidence that can save him from the electric chair. Their choice takes them through a journey through the horror that all of them have tried for years to forget.