Bringing her law degree into play, author Deborah Hawkins knows how to craft a legal thriller that draws the reader in and holds on tight. Vengeance, her brilliantly written 5th book in The Warrick Thompson File series, will once again have fans delighting in the twists and turns that keep the pages turning. Enjoy! 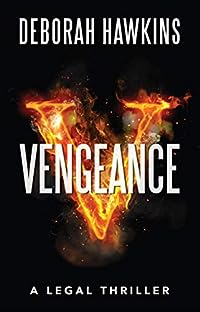 The hard-drinking party boy is guilty of murder. Or is he?

Andy Owens was drunk the night Nate McClellan fell off his father’s yacht. Although his memory is hazy and the evidence is stacked against him, Andy sincerely believes that he didn’t kill his best friend. But no one, including his defense attorneys, will believe him. Andy’s legal credentials aren’t sterling. He was almost last in his law school class, and he flunked the bar twice. But no one else is willing to search for the truth. Andy has no choice, but he isn’t prepared for what he finds.

After her husband dies in another woman’s bed in Washington D.C., criminal defense attorney, Charlotte Estes, returns to San Diego to begin a new life as a partner at Goldstein, Miller, Mahoney and Estes. But she can’t escape her past. The attempts on her life that began in D.C. follow her west, and she’s forced to take on the defense of Andy Owens, the son of the man who betrayed her thirty years ago.

Sean Donovan’s partnership at Goldstein, Miller is hanging by a thread. He doesn’t like Charlotte Estes, and he doesn’t want to help her defend the Owens case. But Hugh Mahoney gives him no choice. If Andy isn’t acquitted, Sean’s career at the firm is over. But Sean and Charlotte both know that the thirty-two-year-old, hard-drinking party boy is guilty.