International bestselling author Ethan Jones brings a new series so heart-stopping and fever-pitched, that you’ll have to take up a permanent position on the edge of your seat. Action movie fans will thoroughly enjoy The Extractor. A novel that promises to deliver and is as addicting as it is exciting. With more books coming in this rapid release spy thriller series, if you like Clancy, Flynn, or Ludlum, you’ll love The Extractor. Enjoy it now. 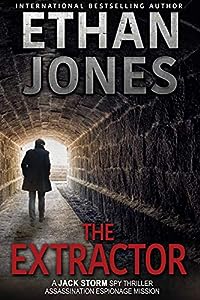 Devastated after his wife and daughter disappeared in a mysterious plane crash, Jack Storm, former CIS extractor, is failing to keep it all together. When a crucial asset is trapped in Tehran, the agency has no choice but to bring their top agent Jack back into service. They assign him a nearly-impossible mission, knowing he’s a ticking time bomb…

Sent in with a know-it-all rookie, despondent Jack is relentlessly hunted at every turn. If he is caught, he’ll be hanged. But does Jack even care?

Double-crossed, alone, and with the clock ticking, Jack, now more furious than hopeless, focuses his rage. But what does he have left to sacrifice to ensure the asset makes it out alive?