Today we have Tony Bertauski’s entire Socket Greeny Saga in one awesome box set. Begin the journey with a white-haired teenager that discovers he’s part of an evolved human race, how he trains to understand his true self, and the legendary conclusion of his true nature. Discover for yourself why Bertauski fans (myself included) just can’t get enough of this incredible authors novels. Enjoy! 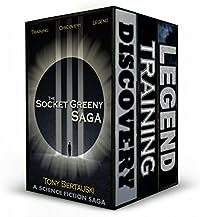 One of IndieReader’s BEST BOOKS of 2014!

DISCOVERY
Work has always come first for Socket Greeny’s mother, ever since his father died. But when she shows him the inner workings of the Paladin Nation, he discovers why. He just wants to go home and back to school and be normal again.
But, sometimes, life doesn’t give us that privilege, his mother tells him.

And when the world is soon threatened and the Paladins are forced into the public eye, Socket discovers what his mother means. If he doesn’t embrace his true nature, life as we know it will change forever.

TRAINING
A year has passed since the Paladin Nation was exposed to the public. Their mission is still to protect humanity from whatever may threaten them. Previously, it was the human duplications, but now that they’ve been extinguished their biggest challenge is dealing with the complications of public image. Socket Greeny, now 17 years old, has been a Paladin cadet for the past year and is nearing the final test. But that’s the least of his problems. He’s trying to live two lives: one as a superhero while hanging onto his normal life.

While fearlessly dealing with his masochistic trainer, he’s trying to salvage his deteriorating relationship with his girlfriend back home. But Socket’s greatest challenge is to find his true enemy. He discovers that fear has many faces.

LEGEND
The Paladin Nation is rebuilding. Socket Greeny is leading them into a new era of compassion and understanding. But when Pike returns, Socket discovers nothing is what he expected, that his life has been planned from the beginning. He is faced with ultimate betrayal. In the end, he won’t be asked to save the world. It’ll be the entire universe.

INTERVIEW WITH THE AUTHOR

When did you start writing?
My first effort started with Socket Greeny. It was a story I started for my son because he hated to read. It didn’t work, but this character – Socket – took root. It was the first time I felt possessed by a character with a story to tell. It took me 5 years and countless rewrites to get it right. I waited by the mailbox after that, but the giant paycheck never arrived.

If you can’t make money, why write fiction?
I didn’t say you can’t make money. There are a lot of people out there with a good book, whether it’s romance, dystopia, science fiction or young adult. I’m just a minnow in a crowded pond. It took a good deal of networking and research to realize just how hard it is.

Thanks to epublishing, I can get the book out. That frees me up to write what inspires me. Writing is the true love. There’s something deeply satisfying to have characters come to life in your mind and watch their stories unfold. It’s a deeper experience than reading someone else’s story.

What do you want readers to get from your stories?
I’ve always been inspired by fearless writing that asked poignant questions; questions like who am I and what is the universe? Things that made me look at life slightly different; books that exposed a layer of reality. Writing in the young adult genre appealed to me most because that’s the age I really craved those questions and answers.

I want readers to see the world slightly different.

What is your favorite character?
I love a bad, bad antagonist that you can’t entirely hate; there’s some smidgeon of redemption you feel inside this demented, sorry character. Heath Ledger’s Joker. A despicable character that didn’t deserve an ounce of pity, but, for some reason, I didn’t hate him as much as I should have. It’s that character I find most intriguing. In The Socket Greeny Saga, the character Pike was my Joker.